This section is still under development.

Arts for Labour (A4L) wants to find the best evidence and analysis available to help the labour movement, and the Labour Party – in opposition and in power, locally and nationally – put culturally democratic policies, structures and practices in place.

We’ve put some research reports and links to interesting projects and initiatives here, some of which we’ve commented on below. These are organised, for the moment, in groups:

A4L invites people to suggest other research and projects which can help providing compelling arguments for progressive, culturally democratic policies at local and national level. A4L does not endorse  research or project references which it lists here.

Kings College: Towards cultural democracy: Promoting cultural capabilities for everyone

Towards cultural democracy: promoting cultural capabilities for everyone is the final report of King’s fourth Cultural Enquiry. On the basis of a 15-month research project, it presents a timely and distinctive vision of how to build a cultural life for the UK that is valuable for everyone, and made by all.

At the heart of the report is a call for a radical but pragmatic new approach to understanding and enabling cultural opportunity. It is argued that cultural opportunities are comprised of a far broader range of freedoms than access to already existing publicly funded arts – the primary focus of current cultural policy.

Whilst acknowledging the vital importance of the publicly funded arts and the profit-making creative industries, the report casts a spotlight on their relationships with everyday creativity – a plethora of cultural activity that is happening around the UK but which is often overlooked. It demonstrates how the arts, creative industries and everyday creativity are not separate but deeply interconnected, enabling each other to flourish. It then makes the crucial connection between these activities and the range of socially-embedded freedoms they require in order to be possible.

In doing so, Towards cultural democracy sheds light on the explosion of cultural creativity that could be happening if the arts, creative industries and everyday creativity were better connected. This would radically increase everyone’s substantive freedom to co-create versions of culture: what the report refers to as cultural capability. This is the report’s proposal for a new way to understand what cultural opportunity consists of, moving well beyond access to currently existing publicly funded arts.

Cultural capability – the combined freedom to speak, to express, to be heard, to experience, to make, to build, to contest, to create – is the key idea at the heart of this report. Documenting and analysing conditions in which people lead empowered cultural lives, the report identifies key ways in which future policy and practice have the potential to more fully realise cultural capability for everyone. It is on this basis that the report offers its distinctive vision of cultural democracy: an achievable future in which the substantive freedom to co-create versions of culture is enjoyed by all. 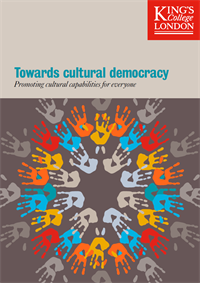 Download Towards cultural democracy:
promoting cultural capabilities for everyone (PDF)

Everyday creativity (i.e., the enormously diverse range of cultural and creative practices that take place outside of the publicly funded arts and the profit-making creative industries) is a hugely important part of the UK’s cultural ecology and needs to be taken seriously.